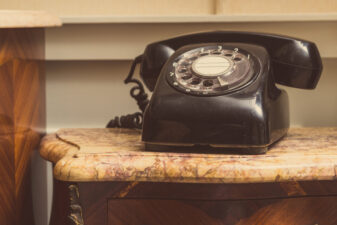 When telecommunication first began, the world connected through physical telephone lines. It began slowly, but eventually our telecommunication system became a massive network of underground wires, undersea cables, and communication satellites. This network system is known as the Public Switched Telephone Network. For a long time, the PSTN revolutionized communications. Rather than sending letters, everyone was connected real-time.

However, the Internet has changed everything. In recent years, the PSTN has become antiquated. However, what exactly is the Public Switched Telephone Network? Is it still important today? If not, what are the alternatives?

What is the PSTN?

The Public Switched Telephone Network is the traditional circuit-switched telephone network. As mentioned earlier, it is a collection of interconnected cables and phone lines used for voice calls. Nowadays it includes more than phone lines; it also consists of satellites, cable systems, cellular networks, and fiber optics. Calls these days are almost entirely digital, however. The PSTN is now nicknamed Plain Old Telephone Service or landlines.

The pros of the PSTN have been few in recent years. With the advent of Internet-based networks, the PSTN is limited in its’ appeal. Nevertheless, the PSTN is reliable, secure, and easy to use. However, it is expensive, difficult to scale, and lacking in features. For customers that don’t have great Internet in their area though, using PSTN based communications is the best way to go. Trying to use something like VoIP or SIP Trunking with poor Internet is a recipe for failure.

If you do have adequate Internet though, the cons of the PSTN certainly outweigh the pros. So, what are the alternatives? Are they sufficient enough to replace the Public Switched Telephone Network? In fact, they are. As long as you have enough Internet (or can upgrade), you can move to an Internet-based form of telecommunications. One of the best alternatives is SIP Trunking. SIP is a form of VoIP. It is a signaling protocol ranging from voice and video calls to data transfers. With SIP, you retain all of the reliability of the PSTN at a much cheaper price. It also has a lot more features. Additionally, scalability is much easier. Rather than adding physical lines, you can add more users at the click of a button.